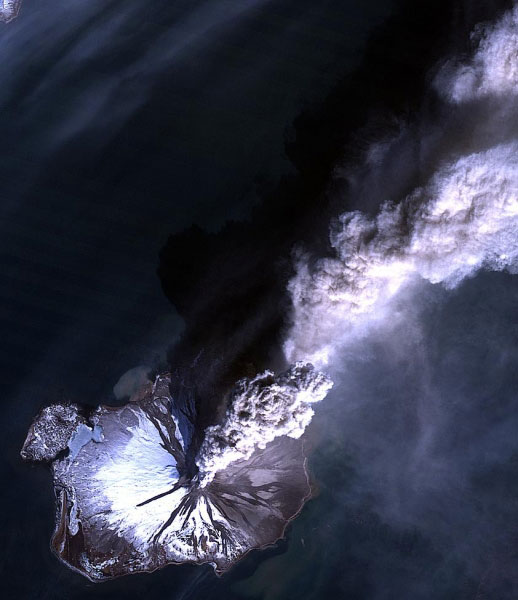 True color composite satellite image of the main eruption of Mount Saint Augustine volcano in 1986. The volcano is located in the southwestern part of the Cook Inlet of Alaska. The volcano makes up its own island within the inlet. The eruption lasted from March to August 1986, though some minor activity was observed as late as 1989. Composite produced with a Red-Green-Blue channel combination of Band 3 - Band 2 - Band 1 respectively. This combination produces an image that appears as it would to the naked eye. There is a large pyroclastic flow on the northern flank of the volcano that is shaded by the ash plume. The ash rich plume can be seen extending to the northeast with some of the lower ash material being blown to the east through southeast over the Cook Inlet. Some ash deposition of the larger material can be seen as a grayish color on the northeastern side of the island. Mud flows can also be seen as darker lobes extending down all flanks of the volcano. The image was run through a linear 2 percent enhancement.
Citation Information:
Image courtesy of Steve J. Smith and AVO/USGS/Geophysical Institute University of Alaska Fairbanks.
Please cite Steve J. Smith and the Alaska Volcano Observatory / U.S. Geological Survey/Geophysical Institute University of Alaska Fairbanks when using this image. Steve J. Smith can be contacted at iceburghwolves@charter.net.To obtain a high-resolution image, open the full size page. Then, right click on the image and click "Save Image As..." or "Save Picture as..."
Contact AVO Privacy Accessibility Information Quality FOIA
URL: www.avo.alaska.edu/images/image.php
Page modified: December 23, 2019 16:01
Contact Information: AVO Web Team