For approximately 6 weeks in May and June of 1931, Aniakchak erupted intermittently in violent fashion, producing widely-felt earthquakes and concussive explosions, blanketing the surrounding region in ash, and reaming new craters within the caldera. Eruption of lava within these craters may have continued into early July.
To mark this anniversary, AVO geologists familiar with Aniakchak will present some interesting tidbits to tell the story of the eruption, its impacts, and other information about this fascinating volcano. What we know about the 1931 eruption comes from contemporary newspaper accounts, the writings and dramatic photographs of Father Bernard Hubbard (aka the “Glacier Priest”) of Santa Clara University, and geologic fieldwork by AVO volcanologists. Check out the many resources on our web page if you want to learn more: https://www.avo.alaska.edu/volcanoes/volcinfo.php?volcname=Aniakchak

To start, let’s recap what we know about the course of the eruption. The following condensed narrative is modified from the Aniakchak volcano hazard report published in 2001.

IT BEGINS: May 1, 1931
The first sign of activity was noted about 10 in the morning on May 1 when residents of nearby Meshik 30 km or 18 miles away on the Bering Sea coast saw a vigorous, white column of steam ascending above Aniakchak crater. What this means exactly is uncertain, but many eruptions are preceded by heating of the groundwater as magma nears the surface, possibly steam and/or gas-driven explosions, and visible vapor plumes. The volcano is fairly remote and this was before there were monitoring seismometers scattered about the landscape, but we’ve not come across any record of the expected pre-eruption earthquakes.

By noon on May 1, residents reported ground-shaking, rumbling, and the beginning of tephra (ash and larger particles) fall from a large, black mushroom cloud rising more than 6 km or 30,000 feet above sea level and hosting flashes of lightning. Ash and pea- to egg-sized, frothy, black pumice pelted homes in Meshik; it must have made a terrible racket! Radio communications in southwestern Alaska were hampered by static caused by ash in the atmosphere, and ash fell as far as Kanakanak (near Dillingham), 225 km or 140 miles north of the volcano.

Continued explosions and ashfall of varying intensity
Explosions and ash emission continued until May 11, when a more intensely violent explosion rocked the volcano. Heavy ashfall and total darkness fell in the vicinity of Aniakchak for several hours. As much as several millimeters of black ash fell at Chignik with 18 cm or 7 inches at Ugashik 85 km or about 50 miles northeast of the volcano. Rafts of pumice fragments up to 20 cm or 8 inches across floated in Bristol Bay west of Meshik.

After May 11, the eruption diminished in intensity until May 20, when another episode of more violent explosions were heard at Ugashik. On May 26, intermittent ash plumes were reported over the caldera and Chignik residents reported “rumbling” that sounded like distant surf in the direction of Aniakchak. Several earthquakes, some described as “severe,” were felt in Chignik and Hook Bay in late May.

Lava flows into June and July
Father Hubbard flew over the volcano on June 10, and by this time, the eruption had become less explosive. His expedition party then entered the caldera later in June and discovered a world completely changed from his visit the year before. Remarkably, they came upon two creeping blocky lava flows at the bottom of two explosion pits in the western part of the caldera. A third lava flow issued from the base of the west caldera wall. Later in the eruption, activity had transitioned from predominantly explosive to effusive, producing lava flows and spatter, as a hotter and slightly more fluid magma reached the surface. 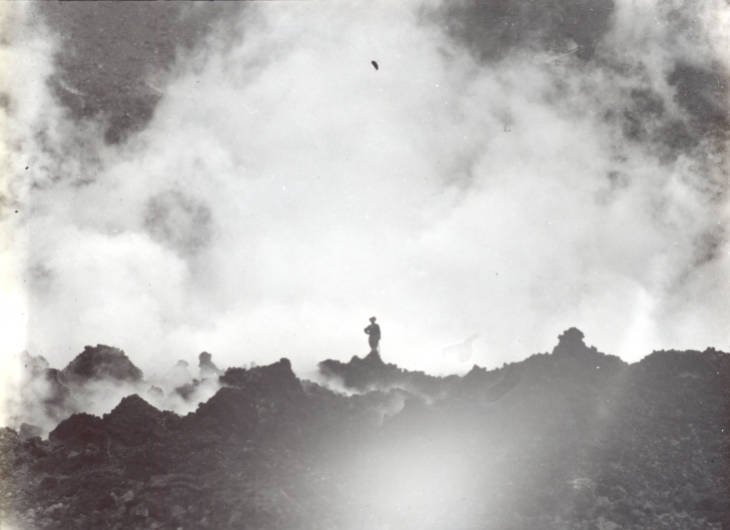 Steam explosions had reamed a shallow pit in coarse ash and lapilli that blanketed a lava-flow field inside Half Cone, a volcanic vent adjacent to the 1931 eruption site. Nearly all the lush vegetation Hubbard had photographed inside the caldera in 1930 was destroyed or buried. Three small lakes in the western part of the caldera were filled with ash and lapilli, and Surprise Lake was cloudy with suspended ash. Hubbard also reported dead birds, perhaps killed by carbon dioxide that had accumulated in low areas near the vent.

Earthquakes during the 1931 eruption were strong enough to be felt in Chignik, 65 km or 40 miles away, and to destabilize the steep inner caldera walls. During his visit into the caldera in June, Hubbard reported avalanches in progress from these walls. Some of the dramatic rock-avalanche deposits that currently extend from the south wall onto the floor of the caldera may have formed in 1931.

Impacts near and far
Ashfall from the 1931 eruption affected several hundred thousand square kilometers of southwestern Alaska. As much as 1 to 2 cm (just under an inch) of ash may have fallen in Chignik. Ash reportedly was about 6 mm (1/4 inch) thick on Kodiak Island as well as in Katmai National Monument (now Katmai National Park and Preserve) and on the Nushagak Peninsula. A dusting of ash was reported at Holy Cross, 600 km or 370 miles north of the volcano and light ash fall was reported at Squaw Harbor on Unga Island, 140 km or 87 miles southwest of Aniakchak. Reindeer and caribou losses were “heavy” at Nushagak, and dead swans and geese, possibly killed by ingesting ash, were reported in Ugashik. Unfortunately, we’ve yet to discover any historical photographs of the impacts in communities in southwest Alaska: if you know of any, please let us know!

The volume of material erupted in 1931 – a basic measure of ‘how big’ the eruption was – is difficult to determine by traditional field methods because of the widespread dispersal of fine ash, much of it falling into the ocean. Also, strong winds and rain in the past 90 years have stripped the deposit making the original thickness on land difficult to assess. Eyewitness accounts are few as is photography of the post eruption landscape. Using limited field measurements and interpretation of written accounts, our best estimate of the total bulk volume of the 1931 eruption deposits is 0.9 km3 or about 0.2 mi3 – that is roughly equivalent to 870 million F-150 pick-up trucks’ worth of ash: a lot.


What does the 1931 eruption tell us about future eruptions?
Geologic work at Aniakchak shows that the volcano is capable of large, extremely explosive eruptions that can last weeks and disperse large amounts of ash hundreds of miles downwind. Some of these eruptions, like the 1931 event, involve explosive interaction of magma and shallow groundwater (a process known as hydrovolcanism). Studies of the 1931 deposits inside the caldera have identified accretionary lapilli (mud balls!), rhythmic surge-and-fall deposits, and blocky ejecta made of pre-existing rock, all characteristics of hydrovolcanic processes. It isn’t surprising that water was involved in the 1931 eruption: small lakes or ponds were mapped in the western part of the caldera prior to the eruption, and shallow ground-water persists today in the form of Surprise Lake and the maar craters. And so, future eruptions have the strong potential to be explosive as in 1931, should rising magma mix explosively with water.


Currently, Aniakchak is quiet. However, the youthfulness of this large volcano, occasional deep earthquakes below the caldera, and the release of magma-derived carbon dioxide from bubbling springs all indicate that the magmatic plumbing system is still active. The Alaska Volcano Observatory is watching Aniakchak as part of its monitoring program for all young and active volcanoes in Alaska. Should signs indicate Aniakchak is waking up, AVO would issue information as soon as possible.

For more information on potential hazards at Aniakchak, please see this report.