Figure 1
The volcanoes in Alaska make up well over three-quarters of U.S. volcanoes that have erupted in the last two hundred years. Alaska's volcanoes are potentially hazardous to passenger and freight aircraft as jet engines sometimes fail after ingesting volcanic ash. On December 15, 1989, a Boeing 747 flying 240 kilometers (150 miles) northeast of Anchorage encountered an ash cloud erupted from Redoubt Volcano and lost power in all four jet engines. The plane, with 231 passengers aboard, lost more than 3,000 meters (~9,800 feet) of elevation before the flight crew was able to restart the engines (Casadevall, 1994). After landing, it was determined the airplane had suffered about $80 million in damage (Brantley, 1990). We estimate, based on information provided by the Federal Aviation Administration, that more than 80,000 large aircraft per year, and 30,000 people per day, are in the skies over and potentially downwind of Aleutian volcanoes, mostly on the heavily traveled great-circle routes between Europe, North America, and Asia. Volcanic eruptions from Cook Inlet volcanoes (Spurr, Redoubt, Iliamna, and Augustine) can have severe impacts, as these volcanoes are nearest to Anchorage, Alaska's largest population center. The series of 1989-1990 eruptions from Mt. Redoubt were the second most costly in the history of the United States, and had significant impact on the aviation and oil industries, as well as the people of the Kenai Peninsula. On the Kenai Peninsula, during periods of continuous ash fallout, schools were closed and some individuals experienced respiratory problems. At the Drift River oil terminal, lahars and lahar run-out flows threatened the facility and partially inundated the terminal on January 2, 1990 (Waythomas and others, 1998). The Redoubt eruption also damaged five commercial jetliners, and caused several days worth of airport closures and airline cancellations in Anchorage and on the Kenai Peninsula (Casadevall, 1994). Drifting ash clouds disrupted air traffic as far away as Texas. More information about the Redoubt 1989-1990 eruptions, including impact to people and infrastructure, is available here. The three eruptions of Mt. Spurr's Crater Peak in 1992 deposited ash on Anchorage and surrounding communities, closed airports, made ground transportation difficult, and disrupted air traffic as far east as Cleveland, Ohio. More information about this eruption is available here. Many older Alaskans also remember ash falling on Anchorage during the 1953 eruption of Mt. Spurr's Crater Peak. The 1912 eruption of Novarupta and Katmai, which formed the Valley of Ten Thousand Smokes on the Alaska Peninsula, was the largest 20th-century eruption on earth, and the largest historical eruption in Alaska. Ash from Novarupta spread worldwide, and is often still remobilized by strong winds. Roofs in Kodiak collapsed due to the weight of the ash; six villages close to Katmai and Novarupta were permanently abandoned. More information about this eruption is available here. Information on older volcanoes previously listed by AVO, and Alaskan mountains that have erroneous eruption reports can be found here.
HOW OFTEN DO ALASKAN VOLCANOES ERUPT?
Although the historical record in Alaska goes back to ~1760 (there are a few earlier eruption accounts), the task of counting known eruptions and calculating an eruption frequency is complicated by the sparse and often inaccurate older accounts. Many times, a volcano is reported as "smoking" without further clarification of what that smoke may have been - a real eruption, normal fumarolic activity, or even atypically tall clouds rising above a summit because of unstable weather conditions. The term "eruption" as used here includes vigorous explosions which may not contain fresh (juvenile) magma, as well as magmatic explosions and the effusion of lava as flows and domes.

Since 1760, 30 Alaskan volcanoes have had more than 240 confirmed eruptions. This averages to just about one volcanic eruption per year. If we add in those volcanoes and eruptions that are suspected but not confirmed, then the average rises to about 1.7 eruptions per year.

However, these figures do not consider the large discrepancy in observation and reporting of Alaskan eruptions. For the past 40 years - a period in which we have fairly good records -- Alaska has averaged more than two eruptions per year. As figure 2 shows, the frequency of reports of eruptions is higher now than in the past, and has been increasing during the twentieth century. The early years on this graph are heavily influenced by just a few expedition log books and the writings of Father Veniaminof: the ~120 possible eruptions during the Russian American period come from fewer than 20 documents, and eruptions from 1867-1940 are also probably significantly under-observed and under-reported. Increases from 1880-present day are probably the result of increased population, communications, and travel, rather than an actual increase in volcanic eruptions.
MOST FREQUENTLY ACTIVE VOLCANOES
It is difficult to quantify which volcanoes are "most active" - if one counts the number of eruptions, does one give a stronger weight for larger eruptions? How does one determine if a volcano has experienced one long, intermittent eruption, or several short eruptions? If we weight all confirmed eruptions as equal, and say that eruptions are combined into one event unless separated by at least three months, (unless there is clear volcanologic evidence not to lump them,) then we get the following numbers for historical eruptions: (as of October 15, 2015):
It is also important to remember that this list may be a better measure of how often certain volcanoes are observed (many more people view Akutan daily - from airplanes and from homes - than view Cleveland, for example) than of which volcanoes are most active. And because this list does not account for size of eruption, some significant volcanoes may be unmentioned. For example, the largest eruption in historical time in Alaska - that of Novarupta/Katmai, in 1912 is also the only historical event from Novarupta or Katmai.
WHERE ARE ALASKAN VOLCANOES LOCATED?
Most of Alaska's volcanoes are located along the 2,500- kilometer-long (1,550-mile-long) Aleutian Arc, which extends westward to Kamchatka and forms the northern portion of the Pacific "ring of fire" (interactive map). Other volcanoes that have been active in the last few thousand years exist in southeastern Alaska (such as Edgecumbe) and in the Wrangell Mountains. Smaller volcanoes, some active within the last 10,000 years, are found in interior Alaska and in western Alaska as far north as the Seward Peninsula.
REFERENCES
[1] The Alaska Volcano Observatory - 20 years of volcano research, monitoring, and eruption response, 2008 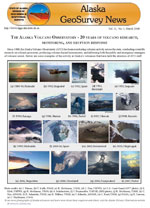 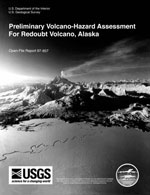