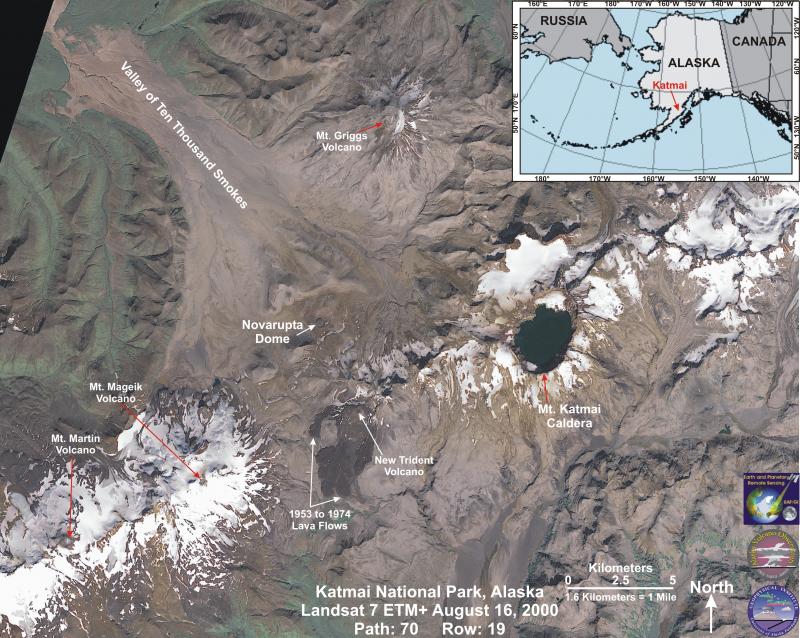 True color composite satellite image of Katmai National Park region of Alaska. Composite produced with a Red-Green-Blue channel combination of Band 3 - Band 2 - Band 1 respectively. This combination produces an image that produces colors similar to human eye sight. The eruption of Novarupta and Mt. Katmai on June 6, 1912 was the largest volcanic eruption anywhere in the world for the entire 20th Century. The 60 hour eruption began at Novarupta, then Mt. Katmai collapsed to form a 2 mile wide caldera. The last part of the eruption was the formation of a lava dome at Novarupta. Most of the pyroclastic deposits from the eruption were deposited in what is now known as the Valley of Ten Thousand Smokes. The valley received this name because the deposits remained so hot for several years after the eruption that steam was released continuously from fumaroles that it looked like the ground was always smoking. Other volcanoes in the park that can be seen in this image are Mt. Martin and Mt. Mageik (in the lower left corner), Mt. Griggs (north of Novarupta and east of the Valley of Ten Thousand Smokes), and Mt. Trident (southeast of Novarupta). Mt. Trident produced a series of eruptions from 1953 to 1974 that resulted in lava flows that extend mostly to the south of the summit. Produced by Steve J. Smith, Volcanology/Remote Sensing Graduate Student from the Geophysical Institute University of Alaska Fairbanks, the College of Natural Science and Mathematics, and the Alaska Volcano Observatory. Image was run through a linear enhancement, 3x3 high pass filter to sharpen the image, and a transformation to produce a higher spatial resolution at 15 meters.
Citation Information:
Image courtesy of Steve J. Smith.
Please cite Steve J. Smith when using this image. For permission contact him at iceburghwolves@charter.net.To obtain a high-resolution image, open the full size page. Then, right click on the image and click "Save Image As..." or "Save Picture as..."
Contact AVO Privacy Accessibility Information Quality FOIA
URL: www.avo.alaska.edu/images/image.php
Page modified: December 23, 2019 16:01
Contact Information: AVO Web Team