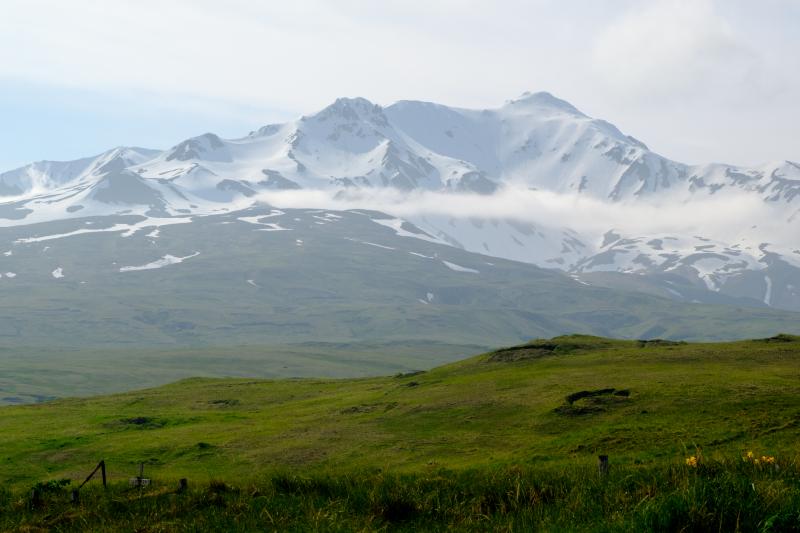 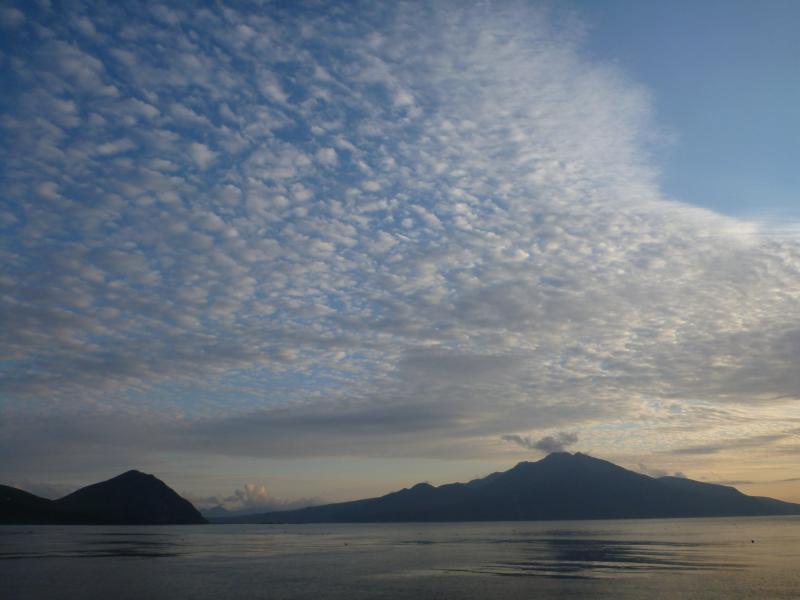 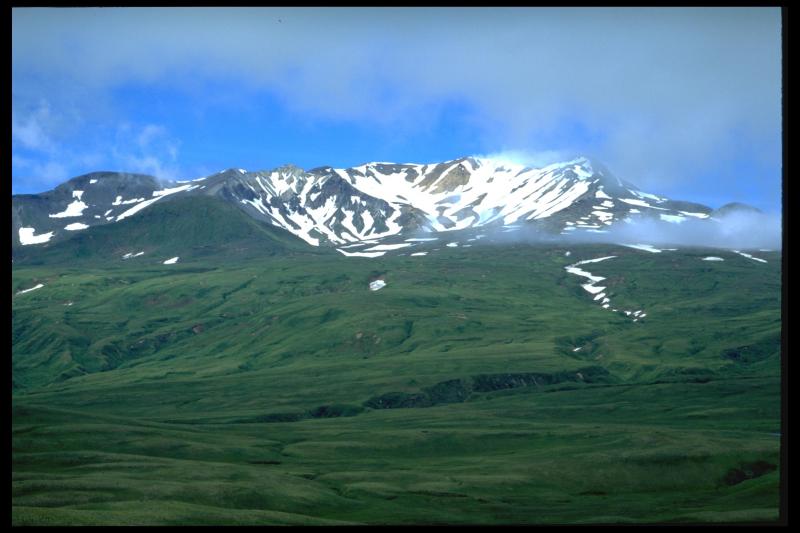 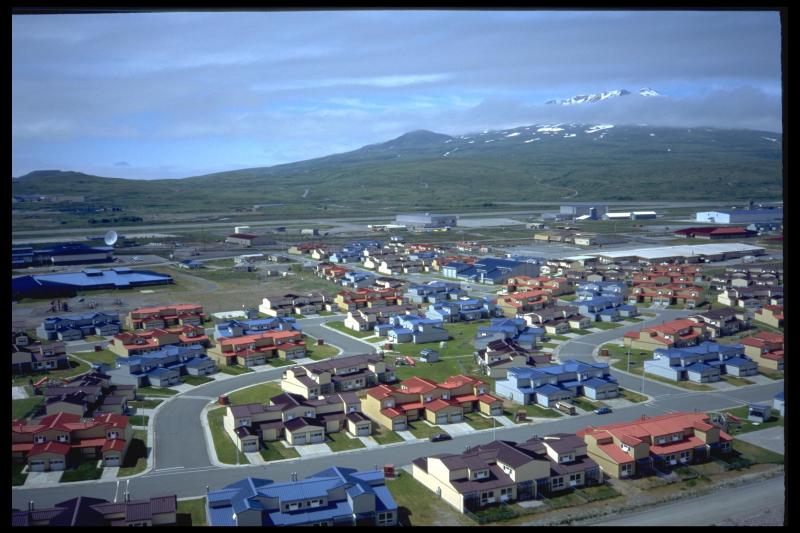 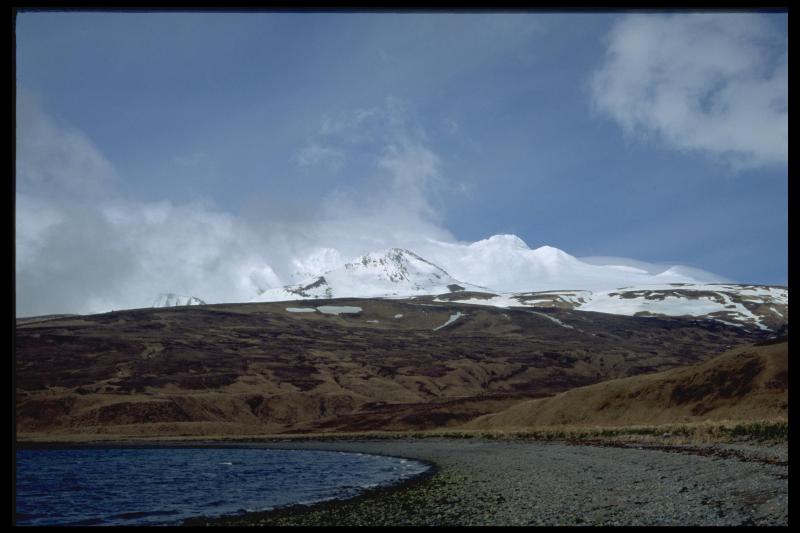 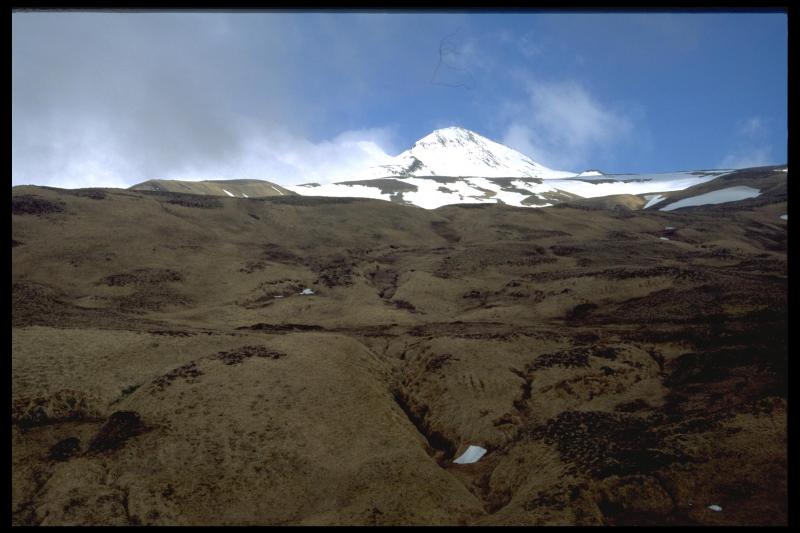 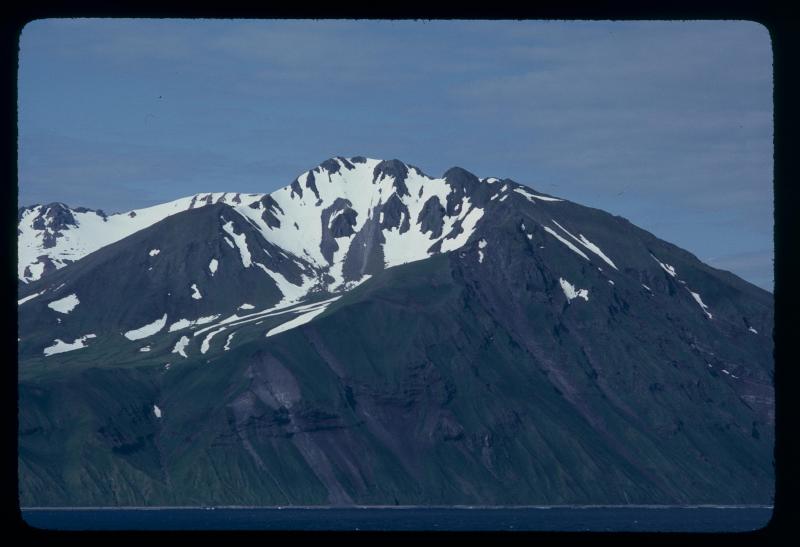 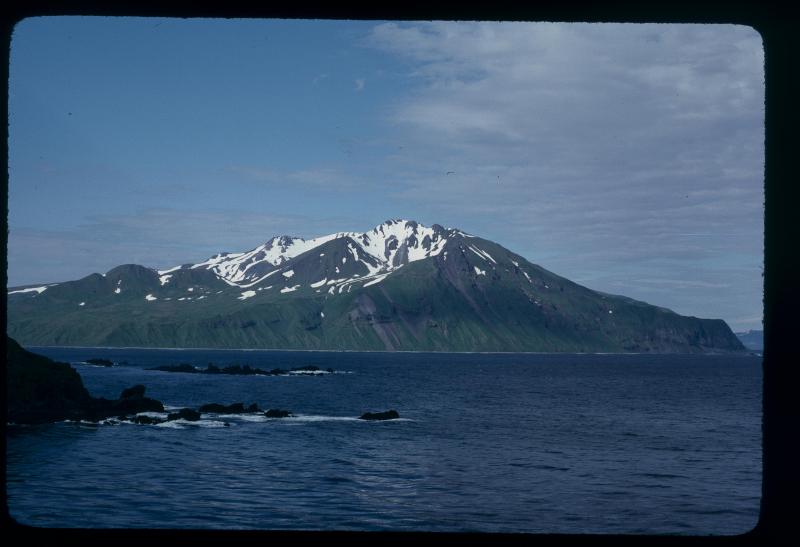 From Wood and Kienle (1990) [1]: "Adak is a large Tertiary island in the central Aleutians with a small (~40 cubic km) volcanic center at its northern extremity. Kanaga lies to the west and Great Sitkin to the east. Because of its easy access, Adak is certainly the most frequently visited and sampled island in the Aleutians. Andrew Bay (~350 m, oldest), Mount Moffet (1,200 m), and Mount Adagdak (650 m) volcanoes have produced essentially all the Recent volcanic material. Only the erosional vestiges of Andrew Bay volcano remain (now filled by Andrew Bay and Lake); it was apparently obliterated by caldera formation, encroachment of the sea, and glaciation. Heavily glaciated, Mount Moffet consists of principally of thick andesite flows, flank domes, and a substantial parasitic cone of many thin basalt flows. The scoriaceous, blocky dome on the outward south flank of Mount Moffet may be one of the youngest volcanic features of this center. Mount Adagdak is a model composite cone with a distinct lower shield of one or two basalt flows and interbedded scoria. At ~350 m the small stratovolcano begins, consisting mainly of volcaniclastic debris and an occasionally thin, fragmentary andesitic flow. The summit crater, with a well-defined south rim, is occupied by a hornblende andesite plug; in places it has vertical, smooth walls peppered with indigenous xenoliths. At one time this plug may have been partly a Pelean spine, large blocks of which are scattered across the shield. A northwesterly directed explosion and ash flow may have strongly breached the summit crater prior to the vent-filling event. A late stage basaltic dome lies on the southeast flank. "Although Moffet and Adagdak are certainly volcanoes, when compared to large Aleutian volcanoes, both vents represent small, almost futile outpourings. This is perhaps reflected in the heterogeneous nature and composition of the erupted materials. Mafic, olivine-rich xenolithic material is common in a thick andesite flow on the north shore of Mount Moffet, and also in an apparently phreatic vent on the west shield of Mount Adagdak; gabbroic and dioritic xenoliths are found along the bouldery beach north of Mount Adagdak."
REFERENCES CITED
[1]
Volcanoes of North America: United States and Canada, 1990
Wood, C. A., and Kienle, Juergen, (eds.), 1990, Volcanoes of North America: United States and Canada: New York, Cambridge University Press, 354 p.
Contact AVO Privacy Accessibility Information Quality FOIA
URL: www.avo.alaska.edu/volcanoes/volcinfo.php
Page modified: September 29, 2020 12:19
Contact Information: AVO Web Team