List Display
LOCATION
FACTS
DESCRIPTION
From Jicha and Singer, 2006 [1]: Wilcox is composed of "tens of basaltic to rhyolitic flows (wvl) of variable thickness that dip 30-40 degrees radially away from the former central vent now occupied by a 0.6 cubic km rhyolitic cone. Several of the andesitic to rhyolitic lavas making up the northern flank (rdf, awf, afp, rfc) spread out laterally as they approached the shoreline. It is unclear how far the lavas extended to the south because intense wave action has eroded away much of the southern flank of the volcano.///The lowest exposures of the stratocone consist of basalt flows intercalated with thick pyroclastic breccias and subvertical dikes. Several of the flows in this section are moderately oxidized, contain chlorite and serpentinized olivine, and are weakly hydrothermally altered. Nonetheless, 40Ar/39Ar ages of 98 +/- 18, 85 +/- 14, and 66 +/- 14 ka were obtained from stratigraphically successive basaltic lavas. These basal units are capped by numerous basaltic andesitic to rhyolitic flows that erupted from 62 to 27 ka. At 23 +/- 5 ka, the eruption of a >or= 0.02 cubic km andesitic (62 wt.% SiO2) ignimbrite filled a valley between Finch Cove rhyolite (rfc) and Finch Cove rhyodacite (rdf). The ~25 m thick ignimbrite is moderately welded throughout and contains ~20% phenocrysts (12% plagioclase; 4% clinopyroxene, 2% olivine; 2% oxides), abundant lithics (up to 20 cm), and pumice (15-40 cm). Some of the last activity at Wilcox volcano prior to the sector collapse at ca. 9 ka included the eruption of dacitic to rhyolitic lavas, which formed Moundhill Point and the adjacent region to the south."
REFERENCES CITED
[1]
Volcanic history and magmatic evolution of Seguam Island, Aleutian island arc, Alaska, 2006 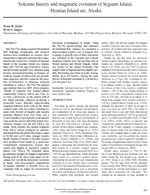